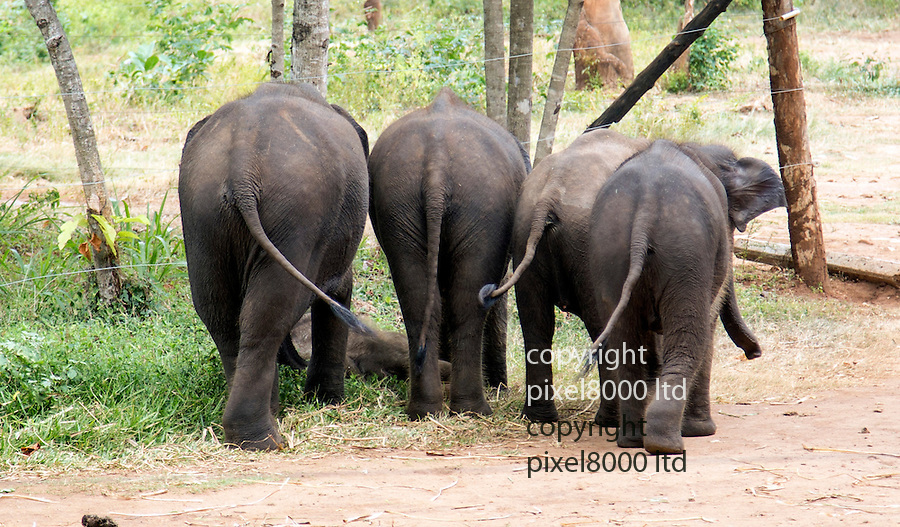 Namal and Hercules (smaller of the two) - two "disabled" baby elephants that have formed a special friendship at Elephant Transit home in Sri Lanka.
Namal has a false leg after being shot- probably caught in crossfire by ivory poachers - he was rescued by rangers and taken to elephant hospital where he underwent life saving surgery. He was later fitted with a prosthetic leg.

Hercules was caught in a trap unscrupulous pet hunters, but again was rescued by national park rangers before being captured. Sadly he now has a deformed kneed due to his injuries.
A "transit home" is different to an "orphanage" because it is planned to return all the elephants to the wild once they are strong enough. But whether these two will ever be strong enough remains to be seen.
There are wild herds of elephants in Uda Walawe National Park in the south of the island to which the transit home is attached.

Many of the other 20 or so elephants were rejected by their mothers or their mothers were killed by poachers.
Hercules and Namal are led out before the main group to protect them from the scrum for milk feeding. The main bunch follows them out and the pair are moved to the centre of the compound for safety.
After milk feeding, grasses are spread around for elephants to feed on where they jockey for the best pickings three times a day.
Again Hercules and Namal are kept back and allowed to stay after the main bunch has been led out so they can get their feed.
During the main feeding Namal, 10 months old, is very nervous due to his plastic leg . But plucky Hercules, just four months, ventures into the main bunch to get a drink from a nearby pond.
Heartbreakingly he stumbles and drops several times to one knee. In the end the step down to the pond proves too much for him and he gives up.
On the back back through the crowd to his chum Namal, Hercules is knocked my another elephant and falls over. A crowd of elephants gathers around him and it is feared he
Gavin Rodgers/ Pixel 07917221968